Poems About The Sea 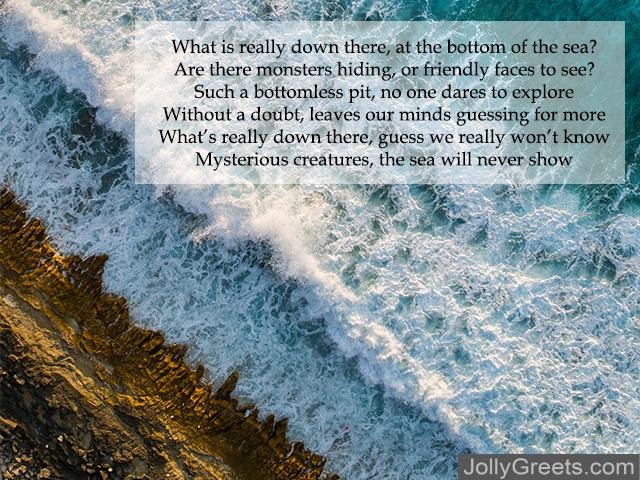 There is something that is so incredibly calming about the sea. It’s as if its very presence has the capability to wash away our troubles for the moment. By sending a poem about the sea to a close friend or someone you know, you can help them to lift their spirits and help them think of calmer times. You may also choose to have this type of poem on your coffee table at home. In this way, you can share the feeling of joy that the poem gives you. You may even find a poem that allows you to be full of memories of a recent vacation that you took. There are many positive thoughts that the seaside can bring to us. You can also hand a card to someone that is very fond of the sea, just to let them know that you are thinking of them. Let the thoughts of the sea filter through and get rid of the messy thoughts of every day life.

1
What is really down there, at the bottom of the sea?
Are there monsters hiding, or friendly faces to see?
Such a bottomless pit, no one dares to explore
Without a doubt, leaves our minds guessing for more
What’s really down there, guess we really won’t know
Mysterious creatures, the sea will never show

2
My feet hits the waves, as I entered the shore
Taking deep breaths in, my eyes began to explore
In the distance, my eyes they did see
I spotted a small dolphin, way out in the sea

3
I found a seashell, walking along the beach
Held it close to my ear, as I placed it close to my ear
As I listen to the sea, the waves sounded so nice
And echoes emerged, such beautiful sounds
I have not yet heard
I almost kept it, thought about it once or twice
But decided to leave it, in case one needs the seas advice

4
The sun was setting in the horizon.
And the sky bid farewell to the light
I was sailing in the Caribbean Sea. As Happy as can be.
The water was so blue and the passion in the waves made the moon drool
Soft and gentle like a mother’s love.

6
Whirl up when the winds blow over you,
Stand still when the winds settle,
The sea is a slave of the climate
A mere puppet controlled by the winds.
The sea is a powerful servant that can destroy ships in an instant
And send waves crushing against rocks that lay in its path

7
A stormy Sea, fierce and wild
A mirrored surface when the weather is mild
Green and blue, black or grey
Like the fickle heart it can change in a day
Yet the ebb and flow of the constant tide
Can be counted upon and relied

9
Huge and wet, dark and wild
Leaves me feeling like a child
Follows me wherever I walk
How I wish the sea could talk
I wonder where it’s been before
Has it touched every shore
Wants to take me off the land
Pulls me gently in the sand

10
The waves whisper to him,
calling him to the soft sand.
The water sweeps over his feet sorrounds where he stands,
Be still, he commanded the Sea,
like his voice was the automated machine assigned to the Sea,
no sooner he said it than the Sea became calm.

11
I dream of the sea,
the sound of the waves and the smell of Salty water and the breeze that carries it.
When I get mad or sad,
I just think of the sea, and it calms me down.
I know a place where the world is still,
where time and space have no hold.
I know a place where my heart and soul are one,
and there are stories left untold,
that place is the Sea.

12
Sea breeze,
the wind that blows from the large body of water onto a landmass,
the cool air that descends from the Sea can make the hot wheater during the summer jealous.
As the day ends to rest,
The sunset does its best,
Setting on fire the lively waves.
The great sea is going to receive,
the burning sun who’s going to leave.

13
The red flags are up,
But you don’t look angry to me,
There are other people in the ocean,
I wade into your body,
Slowly fighting your waves,
I’ve got this,
I understand the rip tides –
I was a former lifeguard,
I surf your waves a few times,
Just me and your strong current,
Then boom,
You throw me under,
I’m done for the day.

14
Lying here next to you,
I could just listen to you speak sweet nothings forever,
The constant pattern of your soothing voice,
Floods my soul,
Crashing,
Splashing,
Filling me up,
Calming me down,
I want to wake up next to you everyday.

15
How great is your presence,
So mighty and vast,
You go on for miles and miles,
All different shades of blue,
Glistening in the sun,
Responsible for so much life,
Both in you and on top of you,
You hold so much power,
Yet you are gentle most of the time,
Sustaining many lives.

16
The beautiful waves rush to the
Shore,
Their blue a wide expanse.
The rise and fall of the water soothing,
As if to entrance.
The sea is here before me,
A calming wild force.
As the sea rushes again,
I feel better than before.

17
Sunlight glitters on a stretch of blue,
The water rolling softly.
Ships dot the horizon,
The sky a mirrored hue.
Deeper than can ever be explored,
With whales breaking the surface.
The water appears calm once more,
Life teeming below the endless blue.

18
The light blue of the sky,
Meets the deep blue of the sea.
The sun glints on the water,
Turning it to a field of jems.
The water moves,
Smooth and curling.
Deep below the surface,
There is a great dark expanse.
The water is filled with life,
Down to the ocean floor.
The sea is beautiful,
Whether seen from the surface or below.

19
The sea rocks back and forth
With a motion that only soothes
The sound quenches anxiety
And comforts our lonely hearts
It’s an amazing wonder to watch
And it’s only one small feature
On this earth.

20
The waves roll in, and then back out
They are beautiful to watch.
They are stong and fierce,
And yet they have a gentle substance to them.

21
The seashells that abound
Alongside of the shore
Speak of this earth’s beauty.
The moon pulls the water elloquently
So as to say hello.
The seaside is a gorgeous place to be.

22
Sound of waves crashing on
the shore, washing up shells.
Sea glass glistens in the dewy surf.
Pecking birds perch
in anticipation of a meal of sand crabs.
Running from the water as
It surges ashore to wipe away
footprints.

23
The tide tumbles cartwheeling
into moonlit swells.
Surfers paddle out to catch a ride on foam tipped
crests
Seals slip alongside these creatures who know the water well.
All carried forward by the momentum of the sea.
Tides turn day into night to
everyone’s delight.

24
Porpoises playful as the sea
surf waves in style as if playing tag.
Silly, they splash in cool green tides
Pulsing their bodies move along the shoreline-
gulls caw a gleeful greeting.
Graceful as ballerinas they dance
in the sea.

25
No need to go to outer space; And search for unknown creatures; Under the sea, you’ll find a place; With plenty of alien features; Below the surface lies a trove; Of treasures to explore; Venture far beyond the cove; To find new life and more.

26
Whether warm or whether cold; The sea invigorates; If you’re young, or if you’re old; A natural bath awaits; The sea is nature’s salty womb; Where you recall your birth; Before you enter nature’s tomb; Visit the heaven on Earth.

27
The salty air; the gleaming foam; The fish that swim in schools; The sea can be a second home; To sailors and like fools; Uncharted waters sing a song; To those who seek renown; But land’s the place where I belong; In grass I will not drown.

28
Dark and mysterious
I am hypnotized by the waves
Crashing hard as knives
Alone, I watch the waves ebb and flow
There is magic in the sea
When I close my eyes
I still see the bright blue waves
Crashing

32
there’s fish a plenty
a whale, a shark
plants , turtles
and maybe some bark
you may see a boat or two
a dolphin, a crab
yeah probably not
a blue fish or gray
maybe a lot
a sea of creatures we got

34
My ocean is far away
how about we meet under
the one same cloud.
My blue water
is for the sun.
I sing underneath the wave.
My rose
is for the show
I am pervaded
in the scent.
My sky is open
embraces the earth and a far distance
past the rainbow
past the peacock’s eyes.
Catch that as well!
From underneath the blue
slips out a butterfly.

35
Traced eyes with circles,
furthermore, a migraine, he overlooked
all he used to be
supplanting evenings with
wailing, he took all he had
also, before long disappeared
A rucksack brimming with
his scourged heart, taking the
debasement away
Dispersing it on
the shoreline, the tides supplanted them
with only shells-

36
Art, a grin like the one
on the substance of Mona Lisa.
Bended like the waxing moon
over the ocean.
Light a fire before a face
however to be seen.
What will it win,
will it show once for all
a moderate tilt on the grinning lips
— a bend delicately bolts on
a rose from the sun,
or on the other hand a shadow underneath the moon?