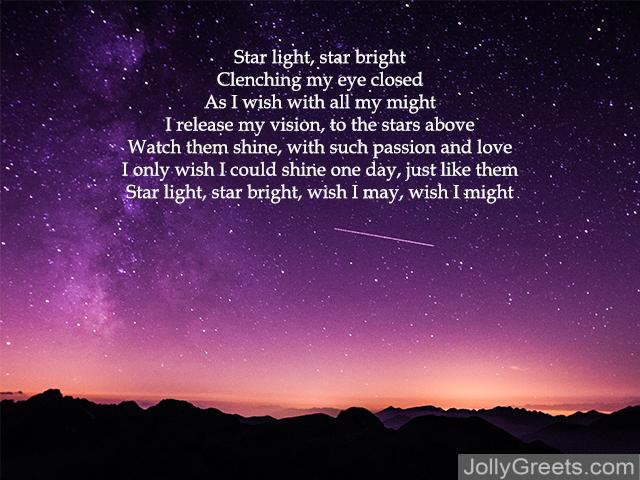 It’s beautiful to think that in the very midst of the darkness of the night, we have many stars to light up our path. From the twinkling of one to the dazzling sight of many, the awe that stars can produce in our hearts is almost hard to explain. Whether you are looking for a simple reminder of how beautiful the night sky can be, or whether you are looking to share a special moment with someone by talking about the stars, these poems can help bring your starry-eyed thoughts to life. Who wouldn’t be happy to receive a unique reminder about how the sky smiles back at us at night? Think about how excited you become when you see even one star pop out during an esspecially cloudy night. It makes it seem as though that one came out just for you to admire. Don’t keep that type of inspiration to yourself. Share your wonderful thoughts with a friend or keep them in a noticeable place in your house. They just may be able to inspire people when they need a bit of inspiration the most.

2
Do you ever imagine, what it’s like to fly
Above the sky, the stars I will say hi
I’d imagine the stars and I, would soon be friends
We would fly in the dark night sky, together holding hands

3
The sky so full, of shimmering lights
Glowing in the dark, yet brightens my night
I count the many constellations, such a beautiful sight
Creates feelings, feelings I love in my life
The stars grow brighter, as I step in my house
Goodnight to the stars
Thank you for making all things right

5
We sat on the roof to in the middle of the night,
The silence was deafening,
As we gazed into the darkness above,
The night was young and so were we,
The stars aligned like a fleet of cars,
The stars were bright like the sun at noon
The sky was beautiful and the stars were magical.

6
The night was nigh as darkness descended
The sky was sad, because the moon was gone,
A dimly lit star shone across the horizon,
The sky was its home and it was all alone
A lonely star was my only source of light
As I made my way back home.

7
Here long before me and after I’m gone
A light through the dark that has guided me home
Burning intently like eyes of fire
Like falling in love, fulfilling desire
It is said and is written whoever you are
Your life and your destiny are contained in the stars

10
I look up to the sky everynight thinking about you,
But there’s something else that draws my attention while looking up,
The Stars,
They are massive self-luminous celestial body of gas that shines by radiation,
They are found in the galaxy
I lay on my lawn and start naming each Stars after you,
Because just like you, the Stars also shine bright.

11
There’s a Star known as Shooting Star,
Sometimes called a Wishing Star,
It is said that when you make a wish about the time this Star shoots,
ones’ wish will come true.
One is often in the dark, especially at night,
But hardly sees a Shooting Star because it is a Shooting Star that waits for nobody.

12
Stars are falling, beaming down
The night is come, but not too soon,
and sinking silently the little moon drops down behind the sky.
O star of strength! I see thee stand and smile upon my pain,
thou beckonest with thy mailed hand,
and I am strong again.
The Star of the unconquered will,
rises in my chest, serene, resolute, still, calm, and self-possessed.

13
You’re mesmerizing,
So intoxicating,
The way you dance across the sky,
For all the world to see,
Glittery and sparking,
Enjoying the stage,
Soaking it all in,
People look up to you,
The tell you their hopes and dreams,
And you always give them hope.

14
I’ve always wondered what you’d be like in person,
I want to reach out and touch you,
To feel you,
To study the light reflecting off you.
How big are you?
How many millions of pieces are you?
How old are you?

15
There’s something different about a country night,
The way the stars twinkle in the moonlight,
The bright contrast against the black sky,
As a dying star says goodbye,
How many years does it take to disappear?
A human year or a light year?

16
The wide expanse of dark sky,
Glittering like a thousand jewels.
I am captivated by the beauty,
By the seemingly endless night.
My breath is heald,
As I look up to its majesty.
The stars are bright,
And they fill me with joy.

17
I walk through the darkened
Streets,
Looking for a quiet place.
I find myself away from city lights,
But there is still a brightness.
I gaze heaven word,
And catch my breath.
The sky above and as far as
Can be seen,
Is filled with stars beyond the
Horizon.

18
I lay in the grass,
Looking at the sky.
As the sun sets,
I wait for the first star of the night.
I am searching far and wide,
for the first that will show.
And suddenly it’s there,
I can see it’s shine.
I wait for it to darken,
Until all the stars twinkle.
And I look for constellations,
I’m amazed by all I see.

19
The stars, they shine so bright
There beauty, absolutely grand
There numbers akin to
The many grains of sand
The vastness of their quantity
Is incredible to the eye
Each one placed precisely,
It’s fun to wonder ‘why’.

20
This galaxy is so vast
The stars are meticulously
Arranged within it.
They seek to light your way.
So if every you get lost,
All you need to do
Is look on up.

21
The stars, they are beautiful,
Their twinkling leaves us in awe
The sum of all their brightness
Is something out of this world.
And so the next time you pause
To look up at the stars,
Think of me.

22
Happily thrown confetti by
unseen hands high above the universe
stars are.
In the black squid ink of the cosmos
a star began it’s disco diva dance into
creation.
Carrying stardust that sprinkles into
the corners of slumbering eyes.

23
Did you know each star has it’s place in
the velvet sky?
A jewel in Orions’ belt, point of the Southern Cross.
Each star has a story to tell, the sky a book to be read.
Can you envision a sky full of objects older than we will ever become?

24
Have you ever tried to catch a falling star?
Comet dust trailing dusk.
Careful observers can watch a sky transform
into a wisher’s paradise.
Cup your hand around a flash
fingers extending wide.
Now you have a wish to ride upon your pocket.

25
Balls of gas in outer space; Stars are burning bright; The glow falls down upon your face; All throughout the night; Their birth remains a mystery; Their death is still uncertain; They’ve stood the test of history; And will see the final curtain.

26
Stars are scattered far across; The endless sky above; Under stars we grieve our loss; And first profess our love; Their twinkle looks a lot like glitter; In a sea of ink; Their majesty sets heart a twitter; And sparks our minds to think.

28
I spend my nights stargazing
From my bedroom window
Tiny lights scattered in the clear night sky
Quietly, I wish upon the brightest star
Wishing for it to take me far
I dream of traveling the galaxy
Where cosmic powers will protect me
Catching stardust in my pockets
Finally being free
Staring out my window
Oh, how I dream
These beautiful shining stars
They bring so much hope to me

29
Remember those starry nights
When we laid out a blanket in the back of the truck
Driving out far into the fields
Our secret spot for stargazing
Far from houses and highways
Alone in the night
Whispering, you tell me about the constellations
Explaining the stars, naming each one
These nights were so much fun
If we were lucky, we world spy a shooting star
We would each make a wish, hoping it would go far
Oh, I cherish those nights
Just us, laying in a pickup truck
Out in the fields
Just stargazing

34
The starry midnight murmurs,
As I muse before the flame
On the fiery debris of aspiration
What’s more, the ashes of want,
“”Life has no other rationale,
What’s more, time no other doctrine,
Than: ‘I for happiness will pursue.
Where thou for adoration dost lead!

35
In the blue opal of a winter early afternoon,
At the point when all the world was a white floor
Lit by the northern sun,
I saw with exposed eyes a noontime star
Consume on like shining fight,
Where every one of its colleagues of the relentless nightfall
Had died one by one.
When I will have put by the vagrant will,
What’s more, down this current wanderer’s sundown street
Rise into the sun,
Be thou my solitary sheer and single star,
Known, named, and pursued far,
At the point when all these Jack-o’- light expectations and fears
Have died one by one!

36
The Star that watched you in your rest
Has quite recently put out his light.
“”Great day, to you on earth,”” he stated,
“”Is here in paradise pleasant evening.
“”In any case, tell the Baby when he wakes
To look for my arrival;
For I’ll hang out my light once more
At the point when his starts to burn