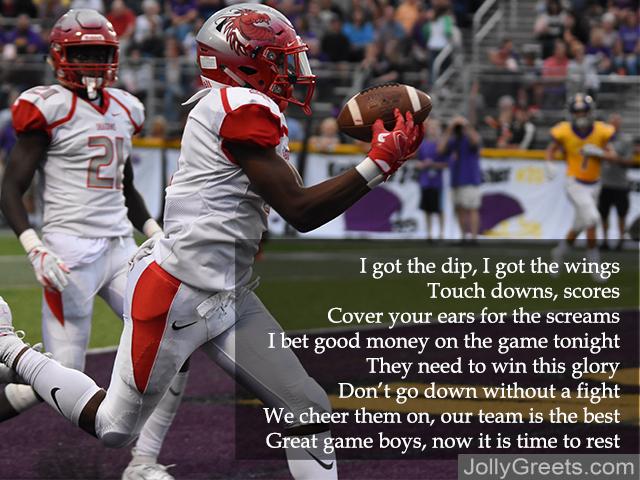 These type of poems are not your typically type of love poems, even though you may have a love for football. That’s why the words that filter these pages are here to help you figure out exactly what to say when it comes to this sport. Football is about more than just the snacks that are eaten behind the scenes, although those can be delicious. Football is an incredible sport to watch and an amazing sport to play. It involves skill that some people seem to be born with while it leaves others only watching and wishing they could play with the same apptitude. This active sport motivates certain people to achieve amazing goals. Maybe you are the person who is passionate about football and you would like to somehow incorporate that passion into a meaningful message. On the other hand, maybe you know someone else who has a heart full of this sport and you are looking for words that speak to what is already on their mind. In both instances, you will want to take the time to find a thoughtful message that pertains this energetic sport. Here, you will have many poems to choose from.

1
I got the dip, I got the wings
Touch downs, scores
Cover your ears for the screams
I bet good money on the game tonight
They need to win this glory
Don’t go down without a fight
We cheer them on, our team is the best
Great game boys, now it is time to rest

2
In comes the ball, I grab it and tuck it in
Running down the field, it’s our turn to win
Helmet fits tight, I’m starting to sweat
No matter the circumstances, we need to give it our best
Huge hi fives, hoorays and claps
Let’s get those touch downs
No times for setbacks

5
Two teams fighting for one ball
Laced boots and shin pads
Goal posts and corner flags
The referee is the main man
Ninety minutes seem like a lifetime
But once the whistle is blown,
The beautiful game comes to life

6
As we march into the pitch in a single file line, like gladiators into the arena
The fans singing our names and the stadium as full as an egg
Sweat forming on our heads, blood pumping in our veins
The referee blows his whistle and the ball is dropped in the middle
Football bloody hell

8
It’s time for the big game, best get there early
The captain will make sure the team competes fairly
The ref will be ready to call any fouls
The fans will be chanting and singing aloud
The pitch will be perfect, the lines freshly painted
The players will bring home the trophy elated

11
A game where the best are the passive
The next move known by the onlookers
Where the watchers are most active
Its typical of the game of soccer.
A game of three possibilities
Win, lose, or draw
An activity of two gameplays
Attack or defend, if you may.
Soccer, with it comes its spirit
One that would never see you bored
To the fans of leagues, cups and trophies
I dedicate these words.

12
As I stand on that muddy grass field,
The roar of the cheering crowds
Is all I seem to hear.
No specific voices; it’s all just a blur.
The only person I really notice
Is the yelling of my coach.
As I go to challenge the ball,
I think, “I want my coach to be proud of me.”
The ball is at me feet, I have to be quick.
I dribble up the side of the field,
Cut in and cross, one touch,
From another player, and goal!
I know my coach is proud of me
From just one look.
Walking to the car,
Ball in hand, covered all in mud,
I receive compliments on a great game.
I say thanks, but all that matters
After the game winning goal
Is that one look from my coach.

13
College football is one of a kind.
Saturdays expand the town.
Grandparents, children, and dogs flood the streets.
All wearing their purple and orange.
Girls in sundresses and guys wearing bow ties.
Friendly strangers offering you a beer.
The band gets everyone hyped.
It’s game time!

14
We train.
Sweating, pushing our bodies to the limit of exhaustion.
We practice.
Pretending we are up against the competition.
We analyze.
Reviewing tapes to see where the holes are.
We wait.
Listening to the sound of the crowds going crazy.
We run.
Moving onto the field like a warrior tribe.
We play.
Leaving everything we’ve got on the gridiron.

15
It’s doesn’t happen too often,
But when it does, a dynasty is born.
Calculated draft picks,
Hard work and determination,
Practice, even for the household names.
Teamwork.
A no nonsense attitude.
Loyal coaches and players.
Diehard fans.
We are, Patriots Nation.

16
The stands rumble like thunder,
As the fans cheer on their team.
The players tackle, run, and tumble,
All across the field.
The offense presses the line,
Pushing towards the goal.
The quarter back is ready,
About to make his throw.
The stands are getting tense,
As the pass is made.
Now everyone is standing,
The goal has been made.

17
The ball flies high,
The players running fast.
Passes are being saved,
And goal lines are being crossed.
It’s football season,
Everyone is ready to cheer.
Tailgates and watch parties,
The games go by so fast.
As fall slides into winter,
Games are in full swing.
The players are ready,
Let’s hope they win this thing.

18
Football looks like jousting,
In an abstract view.
The players look like knights,
In all of their gear.
They run at each other,
Attempting to knock the other down.
Football looks like jousting,
But its not quite the same.
The ball is being thrown,
Instead of a lance being used.
The goal is to cross the line,
Ball in hand.
Jousting is more agressive,
But the stands are just as grand.

19
Hooray!
Your touch down saved the day.
You are successful in every way.
You beat the odds
To gain the prize.
You are a true winner
In everybody’s eyes.

20
Yayy, you have made so many goals
And touched so many hearts
It was interesting to watch
The many different parts
Of you playing football
During this very season
You have grown substantially in your team work
And it’s not without a reason.

21
You had a great season,
You made some great friends
Seems as though football can
Create some enemies
But it can also make ammends.
This next season will be the best yet.
Wait and see, don’t you fret.

22
Huddle in a whisper, teams quick to take offense.
All one really needs is a good defense.
A referee in black and white tweets his whistle.
Players take the field standing on the line.
A football tossed into the air.

23
Tackling on the field as the football spirals in
Southern twilight.
Stadium lights glare off hard hitting helmets.
Players enthusiastically defend the endzone.
Coaches run plays on the sidelines, lips moving to be heard over
the roar of the crowd.
Home team and visitors vying for victory.

24
Slam of bodies on the green field.
A group huddle to befuddle the opposition.
Only fast feet and speed you need to take the lead.
Yellow lines of the goalpost signal.
Going to kick it straight.
Oh! winning is great.

25
First and ten, do it again, run the ball up the field; We’ll push the ball to the other side, we will never yield; They can throw their men at us, and tackle us to the ground; But when the final score is up, we’ll be the best around!

26
Rah-rah-sis-boom-bah, Game Day’s finally here; Put the chicken on the grill, and grab a can of beer; It’s time to play some pigskin now, to tackle, run, and pass; Three cheers we shout for our favorite game, the one that’s played on grass!

27
Football is the game for me, there’s just nothing quite like it; Whether you pass me the ball, or whether you spike it; It’s just a joy to be out there, with all my favorite friends; So let’s suit up an play a game–I hope it never ends!

29
Watching you warm up
On the football field
The game will start soon
Giving me a thrill
I know you are a star player
Right before the game
I say a little prayer
That you will do so well
Proving to your team
That you will never fail
Football has been such a blessing
Teaching you valuable skills
Working hard, never resting
Always working towards a new goal
Throwing the ball far
You dream of the Super Bowl
Don’t you worry, I will always believe
I know with football, you will go far
Great things, you will achieve

30
Football practice can be really fun
There is always a lot to do
Before it is done
We have a lot to prove
Our coach goes over a bunch of drills
Working out hard
Perfecting our skills
My teammates are really strong
When we work together
Nothing can can go wrong
Our coach tells us to take care of each other
Of course, we always do
They treat me like a brother
After we’ve worked out
And practice is finally done
We all hang out together
We laugh and have some fun
Football can be serious
Sometimes it’s actually hard
Although we always have a good time
Playing our hearts out in the yard

33
a quarterback, a kicker
let’s tackle the team
hey i’m open toss
it to me
run run to the field goal
you go
a touchdown for us
we stole the show
cheers cheers from the crowd
we won the football game
were so proud

34
Tomorrow is amusement day all over Husker land Everyone is excited,the Ducks simply don’t get it
My winged animal shot is prepared
The remote in my grasp
I guarantee to shout and go insane
I will root for them as boisterous as possible
Tomorrow is Gameday
A few ducks are going to die!!!!
We should prepare
Give the red inflatables a chance to fly
Presently wipe the tears from your eyes
It’s go Huskers until the day I kick the bucket
Last HUSKERS 35 Ducks 32

35
When the ball is snapped
When I get it
I run it some more
At the point when the other group has it
They won’t go far
Until I am there
Until my group is with me
Like football has been for me
I have constantly adored football
When I have to run
When I have to get
When I have to feel
Like piece of the team” “I don’t observe any longer
at the point when the quarterback goes down
I know without question
there’s banners upon the ground
PC is currently the standard and such
the diversion a trick and joke
not worth watching, such much
principles and punishments currently broke
I’m happy I’m not a linebacker
confounded thus uncertain
hit or no hit the NFL
dark colored is the PC banner”

36
A hail tempest of tears move down your chest
I feel you are close
Your warmness wasn’t genuine
Bridle your compassion and shading clear
Pierce the shaped statue held together by solid paste and dread
You appear to overlook the location
Rather you just here obfuscated up condemnations of defenselessness
Hurt emotions you created as a framework to protect you
Making a sort of gunk around your face
It’s thick film is only a temper irate
I am sorry nobody helped you in modifing your hostility
You will always be stuck juvenile and abhorring
You could generally relinquish disdain and lament
be that as it may, at that point
You would need to forgive